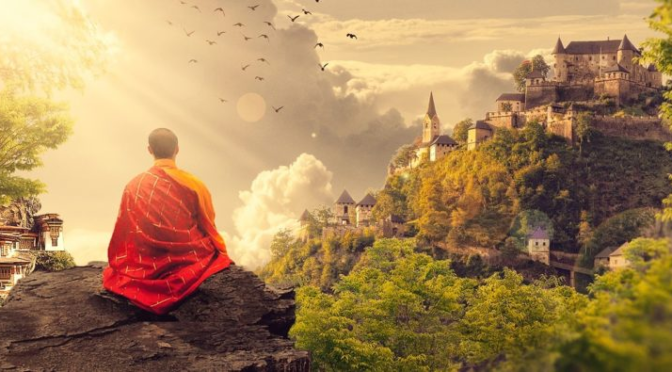 From books and research, to national television and social media, the benefits of Meditation have become widely known. With benefits ranging from relieving daily stress to lengthening telomeres and increasing Grey Matter in the brain, this practice has been touted as one of the most beneficial lifestyle routine one can implement. As our rate of stress increases as a society, and technology advances more and more, people are beginning to return to the basics and get in touch with their stillness.

While this may be true, it is not to say that technology has no use. Recent advancements of technology have given us the tools to make our meditation practice more efficient and productive. No matter what your preferred form of meditation is, these tools can be a great addition to your daily practice, enhancing your mental and overall development.

Meditation has been around for over thousands of years, found throughout history and religious texts. The practice of Meditation has roots in all major religions, primarily found in ancient Hindu and Buddhist texts such as: the Vedas and the Pali Cannon, dating back to around 1500 to 1st century BCE. With original forms of meditation such as the Vedanta practice of getting closer to Brahma (God), to Vipassana (the practice developed by the Buddha), more and more forms began to emerge.

New techniques from Zen/Zazen to early Christian mysticism developed, giving rise to separation of different schools of thought. This separation caused different views on which way is “the best” form of meditation and spiritual practice. With so many different practices to choose from, research and development has given extensive data and technology to receive the most benefit from our daily practice.

All forms of meditation are a way of “turning off” the sympathetic nervous system in order to move into the parasympathetic, rest & digest mode of the nervous system. This shift can be called, “the relaxation response”, resulting in numerous beneficial physiological changes in the body such as better stress response/decreased psychological distress, decreased blood pressure, slower heart/breathing rate, along with multiple psychological changes such as: decreased anxiety/depression, alleviation of insomnia, increased happiness/quality of life, etc. WHICH IS BEST FOR ME?

Now that I know the array of benefits I can receive from meditation, which is the best form/technique for me?

Of the hundreds of different forms of meditation, a few have been heavily researched by scientists and have been found to be extremely effective, in a short period of time. Research on 20 healthy control subjects along with 19 long-term meditators showed that 8 weeks of relaxation response intervention using practices such as Vipassana/Insight meditation, mantra meditation, and transcendental meditation showed altered genetic expression of 2,209 genes, positively impacting their physiology and their response to oxidative stress (Dusek).

Qigong, a form of moving meditation that is synchronized with the breath, has been shown to exhibit 132 down-regulated and 118 up regulated genetic expression alterations with consistent practice. These changes in genetic expression, resulted in decreased inflammation, increased immune system function and downregulation of cellular metabolism (Li QZ). TECHNOLOGY AND ITS APPLICATIONS

On to good ol’ technology. Now how can we utilize technology to “hack” our meditation practice and increase its efficiency and effectiveness. There are numerous different gadgets and mobile applications released each day claiming to be the most effective/useful when evoking the relaxation response. While most have been shown to be effective, I am only going to be discussing the most researched and efficacious tools that should be utilized in everyone’s meditation arsenal. These can be used to monitor and record bio-physiology, track progress, and enhance optimal mental states. Let’s begin.

Neurofeedback brain training has been shown to make meditation or the act of calming the mind much more effective, efficient, and simple form for people struggling with persistent mental/psychological states or simply for people who want to function at their peak performance. The importance of technology such as Neurofeedback is that it is capable to measure one’s brain activity in real time through the use of a medical grade Electroencephalography (EEG). By having this information, it can provide feedback according to one’s unique brainwaves at that given moment.

Programs such as, Neuroptimal, a unique form of dynamic Neurofeedback, does this by detecting abrupt changes in brain activity and gives feedback in the form of an interruption in the audio, informing the brain to self-correct itself, enhancing the brain’s flexibility and resilience. It also detects mental drifting and divergence and will correct this with the negative feedback. By measuring brain activity and giving feedback when abrupt changes happen, this technology can direct brain wave activity to a more coherent state or beneficial brain wave activity based on YOUR specific brain wave activity. This is a key point that I would like everyone to walk away with; Neurofeedback gives you information based on your own specific neurochemistry/situation. This is key and is only obtainable with this technology. Heart Rate Variability or HRV is the measurement or recording of the variation in the time interval between heartbeats. This is tracked through an instrument attached to the ear and connected to a mobile device through Bluetooth, giving an in depth recording of your HRV in wave form and a coherence score (wave flow synchronization/integration). Higher HRV scores have been shown to increased self-regulation, resiliency, cardiac health, and stress tolerance.

My favorite tool to track HRV is the InnerBalance device by Heart-math. It records your HRV, giving a colorful display and reward-based information on how well your session went. It also records all of your previous sessions in order to track improvements. The EmWave2 is also an amazing handheld device by the same company that can be great for those who do not have a smartphone or computer while offering the same information.

Another one of my favorite technologies is called the, OURA ring, which gives in depth information regarding sleep, readiness, activity, and more. Regarding HRV, it tracks your heart rate variability throughout the whole night while you are sleeping, giving graphic representation of your variability. It then provides you with a readiness score, giving you information on how hard you should push yourself that day according to your HRV score. Awesome technology right here. As someone who has tried over 30 different meditation applications, there are a few that have stuck with me throughout years of trial and error. Headspace has been regarded as the “gold standard” for meditation applications due to its functionality, friendly user interface, effectiveness and goal-oriented progression. Headspace also is backed by research and has published multiple studies, including 65+ currently-in-progress studies by 3rd party researches measuring the validity of Headspace’s approach to meditation. This application brags a whopping 14% reduction in stress in only 10 days of use! Very impressive. It also showed improved focus by 14%, compassion by 23% and reduced aggression by 57%. Something we all need indeed. Who doesn’t love awesome music that enhances their focus, memory, and performance. Brain.fm is an application that offers 5 different tracks in its free version for focus, meditation, sleep, to recharge and relax. The different music tracks affect the brain differently, with some reduced mind-wandering, increasing focus and task performance. The approach of this technology is to alter neural oscillations or rhythmic activity in the brain in order to boost performance and balance. Through auditory stimulation, it has been shown to higher synchronicity in the brain compared to normal music, decreased mind wandering using EEG analysis. Current on-going research is being conducted, using FMRI technology to measure the effects rapid amplitude modulation of music has on attention and memory. Try it out for free and experience the increase in focus/attention and relaxation. Meditation is one of the easiest “hacks” you can introduce into your daily schedule that can have profound effects on your quality of life. Meditation is not only exclusive to certain religions, but can be practiced by everyone from all ages, all schools of thought and from all around the world. By finding exactly what form of practice works best for you and receiving proper instruction, you will receive the best results. From Improving your brain power and resiliency, to changing your genetic expression and boosting your antioxidant enzymes, you will be well on your way to becoming a miniature buddha. For all my tech savvy people that want to take their established practice to the next level, my “biohackers”, or simply those who are new to meditation, try out the suggested applications and devices and receive the vast array of benefits listed.